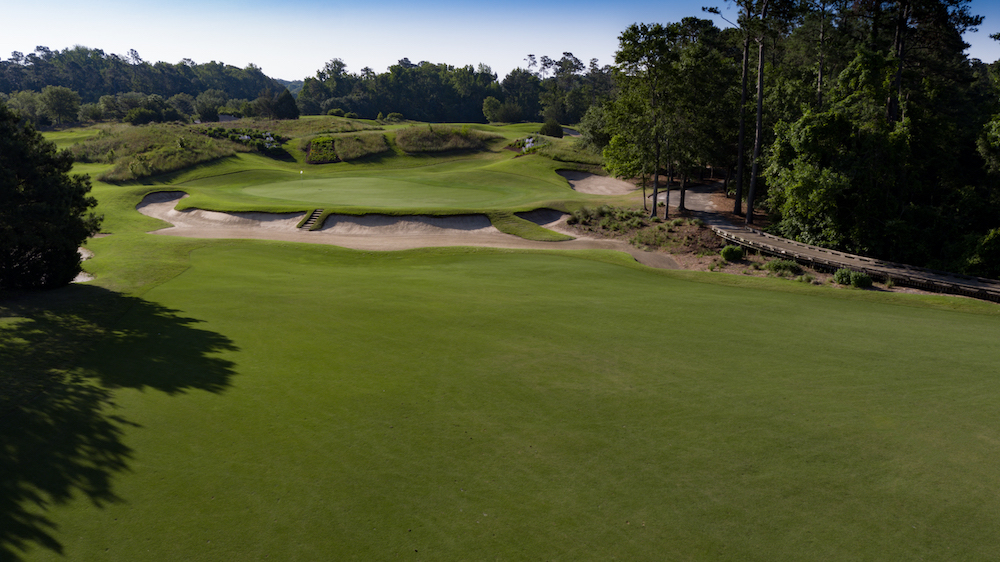 Dale’s love for Strantz’s work prompted him to offer his own hole-by-hole insights he gleaned from his experience at True. Here, in the third of three parts, is Dale’s take on holes 13-18 of his True Blue journey:

Hole 13 – “#13 is one of the longer par fours at True Blue and features a bowl-shaped green that makes sure if you hit it on your second shot it will probably stay on. The opposite of the dreaded crowned green, the bowl should make at least one appearance on every course.”

Hole 14 – “A bit similar to #11, the miss here is obviously to the left. Again, not a hard hole with the proper club … on the back nine (wind) was a definite factor, which it tends to be on a lot of Myrtle Beach courses.”

Hole 15 – “The fifth and final par five on True Blue is a slithery, narrow thing in comparison to all the other par fives with a waste bunker down the entire left side and half of the right. At 522 yards it’s a three-shot hole for sure. Just in front of the green tee box you can see the wooden ramps that are the typical way of getting in and out of the Mike Strantz waste bunkers.”

Hole 16 – “At #16 tee you might be dancing a jig knowing the par fives are over, but don’t get too elated. The closing three holes are tough, but very pretty including what I think is one of the better par threes on the course. At 165 yards it’s long enough to require control of a mid-iron, but the green is more elevated than it looks … so holding the green is not easy. I suspect most average golfers will come up short because they don’t take enough club. Not the worst thing to happen on this hole as long as you avoid the water.”

Hole 17 – “You need to look at the map to see how vicious this hole really is. I hit what I thought was a really good drive and it somehow took a right turn into the bunkers on the right side of the lake. Now what? Nothing between me and the green but water. Then I hit what I thought was a great bunker shot that cleared the water, landed a good ten feet up the bank and then did a slow death spiral down into the pond. Amazingly, I remained calm, fished out the ball and landed it near the pin and made bogey. There was a time a club might have joined the ball in the water. I am now what is referred to as ‘a mature golfer’.”

Hole 18 – “#18 is a terrific finishing hole and I say that not just because I parred it, but because, visually and as a test of golf, it is a great hole. There are water carries on both the first and second shots unless you go way right in which case there are waste bunkers and trees to contend with. The proper shot is a driver or three wood over the middle of the bunker and then an easy six or seven iron into what is a green well below the fairway. As you make that par or even birdie putt, make sure to take your hat off to the folks watching from the clubhouse. If you make triple or worse, throw your hat in the water.”