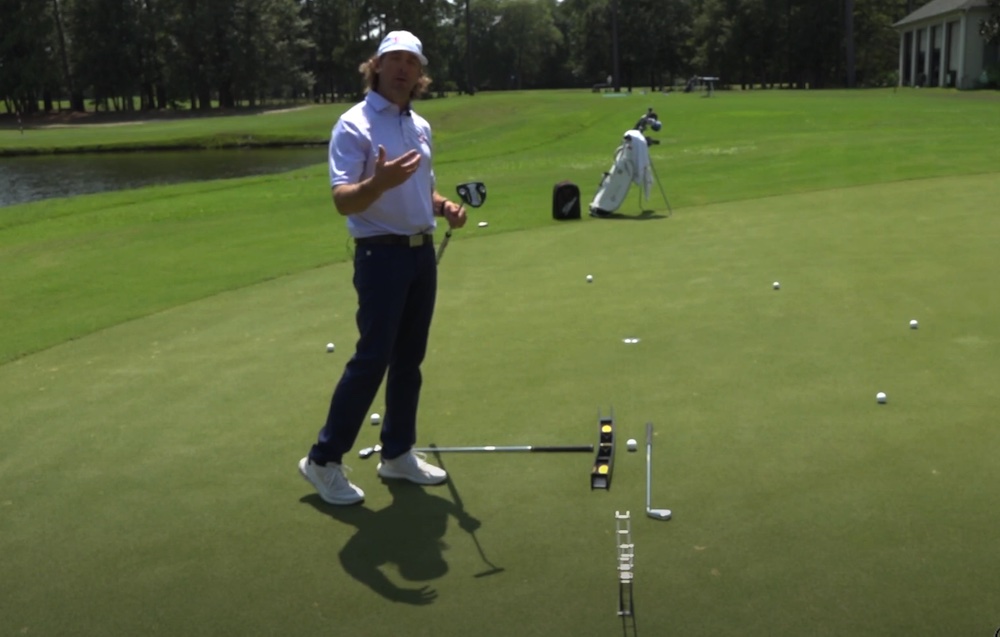 Practice Putting with a Plan

In this tip, Stuart Clark of the Steve Dresser Golf Academy at True Blue Golf Club and Caledonia Golf & Fish Club in Pawleys Island, S.C. walks you through the paces of a putting drill that will help you establish a game plan for attaining better performance on the green.

Stuart Clark:
How you doing today, guys? My name’s Stuart Clark. I’m one of the lead instructors here at the Steve Dresser Golf Academy, located at True Blue and Caledonia in beautiful Pawleys Island, South Carolina. Today, we’re going to go over how to practice your putting. A lot of times, people go out to the course and they want to get better at putting and they just don’t have a basic game plan. So I’m going to try to give you a game plan on how to get better at putting.

Today, you can see I’ve got this kind of contraption or obstacle course set up. What we have done is I have found the center line. This is a straight putt, so it doesn’t break either which way, it’s just dead straight. So when working on our stroke, how we know that our stroke is really effective is we want to work on a straight putt.

So every hole has pretty much a straight putt. So I have found it here. I’ve actually put a chalk line down. And if you’ll notice I’ve got a couple clubs laying down. And what this is for is ball position. A lot of times I give lessons and people’s ball positions are all over the place. As you can tell, it’s about a putter’s width off my left foot. So I’ve got that to let me know.

Now, the second thing is, you’ll see here, I’ve got a putting arc. You don’t have to have one, you can lay a club down here. But the actual putter doesn’t really work straight back and straight through. It actually has a little bit of an arc to it. So it doesn’t really go straight back and straight through like most people believe. So when you’re out practicing, find a straight putt, get set up and organized, where that way if you are putting well, you should make these putts end over end every time.

So you’ll notice I roll it right down there, of course it hit the ball and popped out. But you notice I’m making these putts every time. So that would let me understand my stroke’s pretty good. So then after I have done this a few times, maybe 20 or 30 in a row, and this is basically six feet. I can actually start working around the clock.

So once again, when we go out and practice, putting, let’s get a game plan. You don’t have to have the obstacles, but we’ve got to understand if our stroke is actually good. So this is a good way to kind of work on that. Thank you.