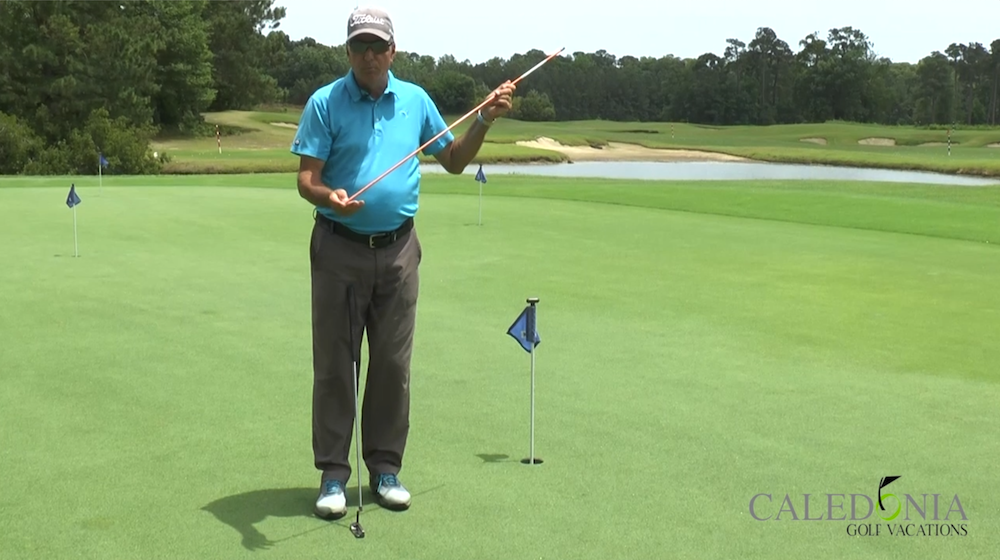 In this video, Steve Dresser of the Steve Dresser Golf Academy at True Blue Golf Club in Pawleys Island, S.C. shows us four great, practical uses for alignment rods around the practice green.

Turn Your Traditional Putter to an Anchored Putter

I’m a big fan of using alignment rods, and here’s one of many things you can use them for. I’m going to turn my existing putter in to an anchored putter. So I’ve got this end against my chest, and the other end down there in the putter itself. And this will allow me to get the feel for a nice … flowing and virtually wristless stroke. Just make sure you put the pointy end down there.

Simply tuck an alignment rod under your arms, like so, and this will help you create kind of a one-piece putting stroke where we’re not breaking quite so much here at the wrist, it’s more controlled by the arms and the shoulders. So we simply get set up, and make our stroke. And what you want to watch out for when you’re doing this, we want the rod rocking a little more up and down, you don’t want to be a washing machine, where you’re agitating sideways like this. Give it a try.

We get a number of players who kind of artificially produce a follow through when they putt – meaning, they really try to shove the putter down the line, and invariably it ends up going too far out to the right. So, in this case, we’ve just taken an alignment rod and stuck it in the ground at an angle. And I’ve put it over there where I don’t want the putter to go. So now I can just make my stroke, and swing through, a little bit under this line. These are so versatile.

We all know one of the biggest errors we see people make when they swing the golf club is coming this way on the down swing. So I like to just put something in the way of that move. So I’ve got an alignment rod in the ground at about the same angle as the shaft, and my job is to take it back and swing under it on the down swing, helps me come in from the inside.