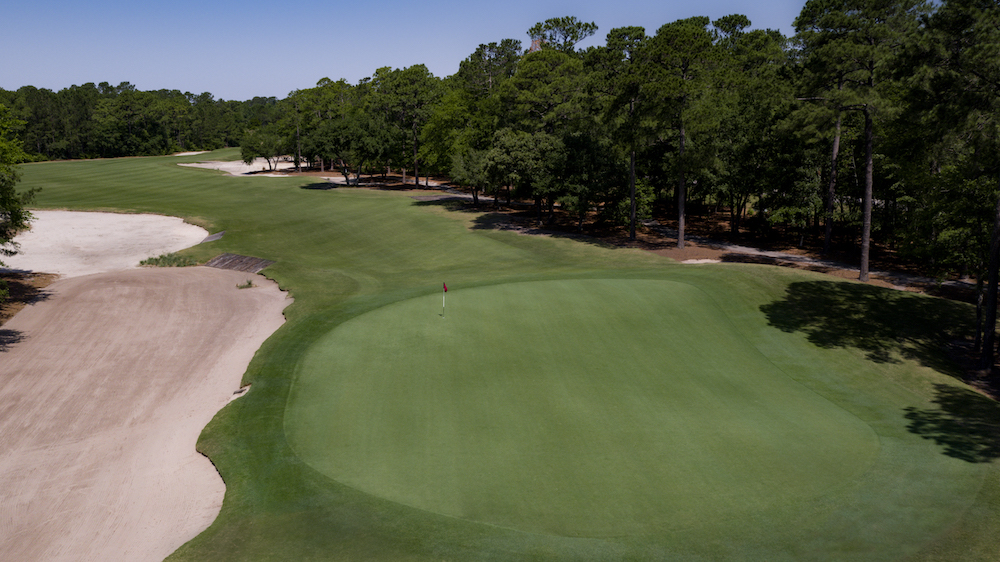 Measuring 433 yards from the back tees, the par-4 fifth hole at True Blue Golf Club displays course designer Mike Strantz’ affinity for misdirection. As True Blue Head Golf Professional Bart Romano describes, “Five is a downhill tee shot with some misdirection — which Strantz does quite a bit in his design features — where the safest and biggest part of the fairway is clearly out to the right, but the hole doglegs back to the left.”

There’s a large waste bunker on the left-hand side, so longer players will be enticed to create more of a straight line to the hole. Says Romano, “Obviously, the further left you can hit it and get it over the bunker, the shorter shot you’ll have into the hole. You can hit the fairway pretty easily out to the right, but it’s going to add 30 to 50 yards to your second shot.”

Pin placement also makes a big difference in club selection. Romano explains, “If it’s a back pin and you lay it out to the right, you could have a nearly 200-yard shot in there after hitting a good drive. It’s very deceptive, the way the hole makes you believe you should hit it out to the right, but the further left you challenge that waste bunker, the shorter shot you’ll have.”

There’s another waste bunker to the right of the green and a pot bunker in the front-left, though Romano notes that the pot bunker doesn’t really come into play that often.

As for the green itself, Romano describes it as “really, really big, really big,” and he’s not kidding. The green depth at No. 5 is 40 yards, and it’s easily as wide. There’s a big mound on the front-left of it, but otherwise, the front-right is fairly puttable and flat, as is all the way back, and from the middle to the back. Once again, Romano points to Strantz’ use of misdirection and deception, saying of the green, “It’s all fairly flat, with very subtle breaks.” He adds, “It’s usually a pretty difficult green to putt, because it’s not obvious which way the putts may break.”

So, make sure you don’t get deceived — off the tee or on the green — when you play True Blue No. 5 with Caledonia Golf Vacations.