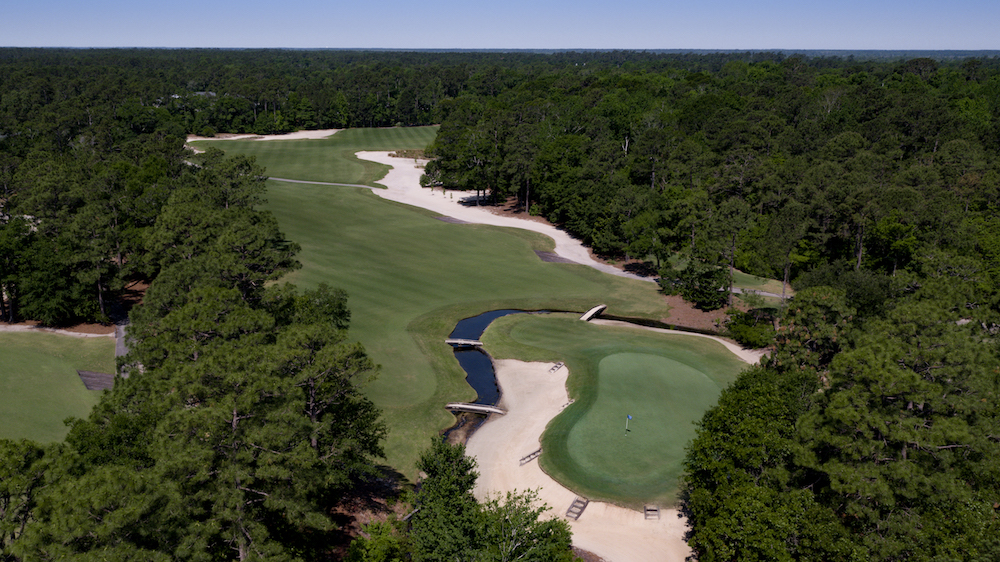 No. 1 at True Blue: A quintessential three-shot par 5

How often can it be said that a golf course truly has a “signature hole,” one that defines the entire experience and perfectly demonstrates the architectural imagination of the course designer? Now, how often can it be said that a course has multiple signature holes? Well, that certainly is the case at True Blue Golf Club, where several iconic holes are on display from the very beginning of the round. Take, for example, No. 1, one of the best three-shot par 5s anywhere on the Strand and a hole that is sure to leave a lasting impression during your spring golf getaway with Caledonia Golf Vacations.

No. 1 is the longest hole at True Blue, a dogleg left measuring 624 yards from the championship tees. True Blue Head Golf Professional Bart Romano calls it a “true three-shot par 5,” which is emblematic of most Mike Strantz-designed courses that typically have at least one three-shot hole. Romano said, “You basically have to get from Point A to Point B to Point C without any interruptions from the possible disasters waiting to happen.” But that is far easier said than done, and as Romano added, “There is no letup in the hole. You have to hit a good drive, a good second shot, and then the approach shot.”

With the tee shot – your first shot of the day – Strantz attempts to lull you to sleep with a wide fairway that will have you thinking you can rip driver wherever. But be careful! The right fairway bunker most definitely is in play for longer hitters. There also is a wraparound bunker down the left side of the fairway that runs all the way down to the green. The green complex itself is a raised green, with a creek that runs all the way around the front and right side and a large flat-faced bunker protecting the right side as well.

Romano said of No. 1, “Most people will see par 5s on the scorecard and assume, ‘Okay, par 5s should be birdie holes.’ But this is not really the case. This is a true three-shot par 5, a good warmup hole because you’re usually making three full swings.” He concluded, “If you’re playing smart, it is a par 5 that is not out of reach. But if you get it going a little sideways, you could be off to a bad start.”

With so much room to cover, there are lots of ways to have fun and make a good number on No. 1. Which will you choose when you play True Blue Golf Club with Caledonia Golf Vacations this spring?